In ENGAGE, we study the inherent resilience in societies – the way existing social values and material structures contribute to resilience by influencing the actions of ordinary citizens. What is it with the informal, largely invisible qualities of communities and societies that make some able to adapt to and withstand major shocks, while others seem more brittle? The material and socioeconomic differences obviously play a huge role – the difference between poverty and wealth is not a matter of culture. Nevertheless, there are social characteristics that seem to be in play when crisis is either looming or manifest. Trust is a concept that is frequently mentioned in these respects – between members of the population, and between the population and various authorities. In this text, we will reflect on the term trust, and its relationship to societal resilience.

In research articles, trust is one of those concepts which is frequently mentioned in passing, but rarely discussed. We all have a gut feeling about the meaning of the word, as “something” that is in play when collaboration runs smoothly and effectively, and where there is a high level of solidarity and social cohesion among a group of people. When we are doing research, however, we need to specify the concept beyond the conception of trust as the magic sauce of social interaction.

A simple and general definition of trust is the following, where trust is defined as one’s expectations, assumptions, or beliefs about the likelihood that another’s future actions will be beneficial, favorable, or at least not detrimental to one’s interests. (Robinson 1996: 576)

It follows from this definition that trust is a relational concept. Although individuals and specific cultural contexts may have different starting conditions and conceptions of trust, it is always a matter of trusting someone or something. Trust is also a multi-level concept – the “ones” and “others” holding expectations about behaviour may be individual actors, groups, organizations or societies, and individual actors may place trust or distrust in e.g. an organization or a public institution. The latter illustrates that trust is also used in a generalized way. For instance, Scandinavian countries usually score high on several measurements of trust – in each other, in private companies, and in the nation states. In this way, the expectation, assumption and belief that we are generally surrounded by trustworthy actors is often described as a social value and cultural trait of Scandinavian countries. If the expectations are not proven wrong by too many instances of contrary evidence, a high level of generalized trust can be expected, although there is no determinism involved in this process.

What is it that we trust in others?

If we were to explain why we trust someone, we will often do this by pointing to some characteristics either of the actor we find trustworthy, or of a class of actors we see this particular actor as belonging to. This points to a set of underlying categories or antecedents of the overall judgment that someone is trustworthy. Roger Mayer and colleagues (1995; Schoorman, et al., 2007) developed a model of trust, integrating research from several scientific disciplines, where they described three interrelated criteria involved in deeming an actor trustworthy:

When we decide to place trust in someone based on such categories, this involves a form of risk. We don’t necessarily know by personal experience the ability, benevolence or integrity of the actors we interact with so there is always a possibility that will be left disappointed. However, taking this risk saves a lot of time and effort in social interaction and collaboration. It reduces the complexity compared to gathering background information about other actors and taking steps to minimize one’s risk of being exploited or betrayed. In this way, trust is a prerequisite for the formation of societies that is larger than consists of more members than the number of people we can gain personal experiences with.

Why do we need trust? The link to societal resilience

When we want to study the inherent resilience of societies – the informal and contextual aspects that come into play when faced with a major shock or crisis – we meet the multilevel concept of trust in its many facets. We meet it as an important phenomenon when members of civil society interact with first responders and authorities in times of crisis. Do we expect the actors’ ability to be high, that they genuinely have the best interest of all groups of the population in mind in their actions, decisions and communication, and that their integrity is such that they act predictably and according to principles we find legitimate? The diversity across nations in dealing with the COVID-19 pandemic provides more than hints that the importance of such questions should not be underestimated.

However, the interaction between the population and various authorities around matters of risk is not the only link between trust and societal resilience. As researchers on societal resilience, we also come across trust as a social value. Many of the things we do as members of society involves trusting others by giving them the benefit of the doubt. When we engage in collective action, actions that are aimed at achieving a common good, this is based on expectations, assumptions and beliefs about how others will act, without actually knowing all people involved. Importantly, when generalized expectations towards others are shared by other members of society, they come back as both external and internalized expectations to ourselves (“do to others what you would like others to do to you”). This is most likely a social (and psychological) phenomenon in play when civilians take great personal risk in helping others during terror attacks, major accidents or natural disasters. This might happen without interaction with first responders or authorities, and in situations where no one would blame you or even know if you chose not to do something. In a strictly individual and rationalistic decision perspective, the decision to avoid personal risk would be the “optimal” decision for the individual. Still, spontaneous volunteering involving personal risk-taking is a common phenomenon in major crisis.

This is why ENGAGE’s preliminary model of societal resilience that was recently published, places various facets of trust as a key contextual aspect of societal resilience. Existing research either ignores or underestimates the role of trust in understanding and improving resilience, and we see it as a core ambition of ENGAGE to create more knowledge in this respect. 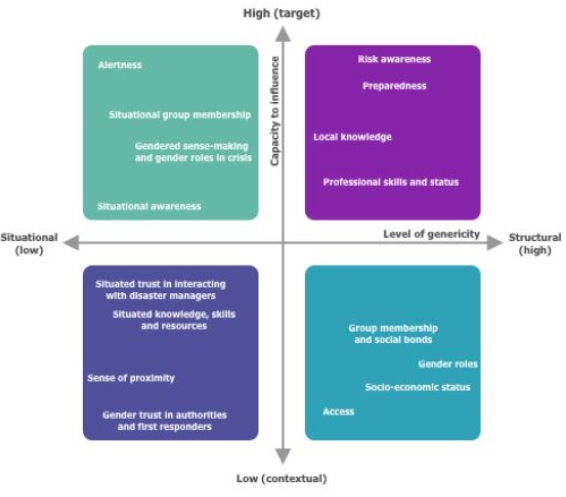