Communication and Public Emergency: The Role of Everbridge in ENGAGE

Responsiveness to a public emergency is crucial to ensure the safety of individuals who might be affected by it. As a  As a provider of Critical Event Management and Public Warning solutions, Everbridge is focusing its attention, research and product development to the most effective ways of reaching communities in case of a public emergency. In this optic the company has joined the Project ENGAGE, joining the consortium of public and private partners. Among them, Everbridge represents the private sector stakeholder and practitioner in deploying solutions for public and private partners to deal with crisis communication in real-life situations and increase societal resilience.

Communication and Public Emergency: The Role of Everbridge in ENGAGE

One of the main questions that Project ENGAGE aims to answer is: how efficiently do authorities communicate emergencies to the public? In a recent video, Everbridge’s Chief Technology Officer Imad Mouline tries to answers to this question discussing the rationale behind the three scenarios directly related to communicating emergencies with public alerts. These are the scenarios that Public authorities are confronted with, at the onset, during and after an emergency; in communicating to the area, to the people impacted, to the first responders.  Until recently, governments have had to make a straight choice between communication channels for public warning.

Now, following many years of investment in R&D and with over 16 patented innovations, Everbridge Public Warning Centre helps governments to maximise the reach of their emergency alerts, ensuring no one is left behind.

The Everbridge Public Warning Center is the next generation Smart Hybrid Public Warning system alerting for Critical Event Management. It seamlessly combines Cell Broadcast and Location-based SMS with situational awareness, in addition to full support for multi-channel alerting. This means that governments can  prepare emergency alerts  with information on the number of people in the area, and target the population  that needs to be reached, with specific messages, before, during and after the emergency. The visibility of devices  that will be alerted offers a significant improvement for authorities, emergency response teams and public safety officials. 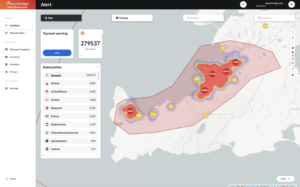 Furthermore, by combining  Cell Broadcast with situational awareness and Location-based SMS  throughout a critical event, the system becomes even more powerful and allows Government users to adapt their response to the situation and provide ongoing instructions and advice to the public. This is a significant step forward from simply providing a one-way, one time alert  to now being able to handle the complete life cycle of critical event alerting.

Scenario one: By using geo targeting, the system will assist the emergency manager to identify who needs to receive alerts, based on their current location or their last known location, as well as other groups of people that need to know, because of their connection to the area where the incident has occurred. This might include people who are moving towards the area right now, or who habitually visit the area to visit family, as well as anyone travelling to the area on a regular basis.

Scenario two: Follow Up: The system will assist the emergency manager who needs to declare the evacuation, in targeting the individuals who might be directly affected. Later, through a color coded diversification, the manager can notify the targeted people who received the original notification.

Some minutes after the evacuation order, the system will provide a snapshot to show how many devices are still in the area. This reveals if people are moving away, or if there are people who are still at risk, because they cannot evacuate. In this case, the system will categorize these devices as people in danger and in need of help or recovery through search and rescue.

Using Location Based SMS, the emergency response team can send a message only to those people to check on their safety.  The person can reply to the SMS with 1: safe, 2: need help please call, 3 + text: for providing more information.

Through this simulation Everbridge Public Warning System will provide the consortium research material on the response modalities with the enhanced functionalities of its Next Generation Public Warning System and public safety. In turn, the data provided by the simulation will also generate a feedback loop to inform Everbridge product development to further enhance its capabilities.